We use cookies to improve your experience of our website. Find out more.
Okay
Chris Hill - Founder
New World Trading Company

New World Trading Company is the UK’s fastest-growing pub business. It has graced the Sunday Times Fast Track 100 list for three years, and appears in the top 10 of the Best 100 Companies to Work For. Chris has not only found a winning commercial formula but he has done so with a happy, motivated set of workers. We met with Chris to see what we could learn about how he’s achieved such success…

Latest News
Throughout history, entrepreneurs have stepped up in times of crisis. Over the coming weeks and months, we'll be talking (remotely) to inventors, creators and organisers who are responding to the unprecedented challenge of Covid-19 in the only way they know how – by achieving seemingly impossible goals to help nation and world in their hour of need.

Behind the bar at The Botanist in Newcastle, a tree reaches up into a beautiful glass-dome ceiling. In the Sheffield pub of the same name, a Victorian bandstand sits centre stage in the “Butterfly Emporium” – a room straight out of Harry Potter’s Hogwarts. Meanwhile, in Liverpool’s Smuggler’s Cove, entering The Rum Room feels like stepping below deck on an 18th century galleon.

All three pubs (or are they restaurants, or maybe bars?) belong to the New World Trading Company, and each is the product of CEO Chris Hill and his team’s not-inconsiderable imagination. To say Chris’s pubs – there are 20 in total so far – are thriving is an understatement. His New World Trading Company, backed by Graphite Capital, is now the UK’s fastest-growing pub business. It has graced the Sunday Times Fast Track 100 list for the past three years, and appears in the top 10 of the same title’s Best 100 Companies to Work For.

These stellar placings prove that Chris has not only found a winning commercial formula but he has done so with a happy, motivated set of workers in an industry renowned for antisocial hours, hard graft and lacklustre pay. Such an achievement deserves further examination. What can we learn and what lessons can we apply to our own businesses? 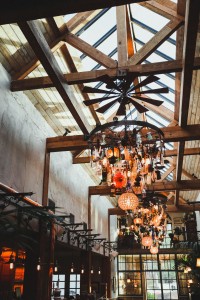 First, some background: Chris started out in hospitality aged 18, washing pots and working in city pubs during his time at Nottingham University. He joined restaurant group Living Ventures as a junior manager, rose through the ranks and by the age of 27 was running 11 Living Ventures sites and knocking on the boardroom door – but not getting in. In 2013, the boardroom still lacked a berth so a plan was hatched. Chris would become MD of New World Trading Company (NWTC), which Living Ventures had launched in 2012, comprising two major sites: The Oast House in Manchester and The Botanist (the first) in Alderley Edge. His employer would splinter NWTC from the rest of the company and hand Chris the controls.

Chris embraced the freedom like a pilot who suddenly gets to fly a 747 after years of simulation training. “I went from running 11 sites to becoming almost a start-up,” he says. “It was massively exciting.”

In 2016, the adrenaline pumped even harder as he performed a £50m management buyout in partnership with Graphite Capital. Living Ventures left the stage, and Chris was now running his very own company.

That’s the history. The question is: how did Chris go on to create the UK’s fastest-growing pub business? What drove that success?

Chris’s analysis is definitive: the cornerstone of NWTC’s extraordinary growth is – without doubt – the happiness of its workforce. Staff satisfaction is the rock upon which the company’s turbo growth is built. “I believe the processes of creating happy teams are the building blocks for all business success,” he says. “If I were working in another sector, I’d do exactly the same.” But “do” what exactly? How has Chris achieved such employee wellbeing?

The first step was to create a crystal-clear vision that prioritised the team. NWTC’s mission statement is irresistibly lucid: “Our company mission is simple,” says Chris. “To find and develop likeminded people who share our company values; creating experts who deliver unrivalled customer experiences.”

Note the word order. The first priority is to “find and develop likeminded people who share our company values”. It is not to “create the most magical venues in the world”, nor to “provide the best customer experience”. The prime concern of NWTC is to find the right people and to develop them.

Now break it down further. NWTC wants to find “likeminded people”. This is crucial for a team’s happiness because it sets the recruitment and promotion policy – NWTC will do everything possible to find people who fit in with their unique culture.

Next, NWTC “develops” its recruits. This is critical because well-trained workers feel valued and have the tools to perform at a high level. “Training is key,” says Chris. “In some ways, we are a training company that happens to sell food and drink.” This statement shows how much store NWTC sets on training. 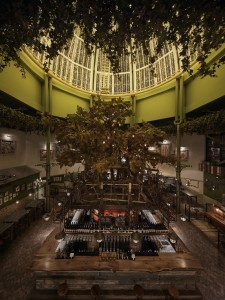 And what’s the point of training these likeminded people? Answer: “To create experts who deliver unrivalled customer experiences.” That is the end goal… but it can only be achieved if you get the people bit right first.

Following such a company mantra can only get you so far, however. Once the right people are hired, trained and focused on delivering unrivalled customer experiences, the real work starts. From there NWTC must make its people feel fulfilled and happy with more than just words and promises. It achieves this in many ways.

Firstly it deliberately pushes the boundaries (two of its six core business values are “exploration” and “ambition”) and creates memorable stories as it does so. This is important to the job satisfaction of people who are, generally speaking, youthful and creative themselves. For example, many employees feel pride that NWTC supports local musicians by hosting live music in every Botanist venue, every day of the week. They also enjoy their company’s collaborations with independent breweries. And they love the NWTC’s charitable activities, including a partnership with Barnado’s and its ambition that 4% of its total workforce will come from physically or mentally disadvantaged backgrounds by 2020.

Chris describes why these ‘softer’ (i.e. non-financial) rewards are so important: “You are giving staff emotional and social collateral to go with their wage packet – badges of honour they wear proudly both in the job they do and in their life outside work. We have an army of people who go out every day and do their best for their customers because they care about the company.”

The company app, Tribes – an idea dreamed up by Chris (possibly after reading Harry Potter!) – is another source of staff joy. He explains: “One of our biggest challenges as we grow is the dissemination of our culture. If we open a site in Bristol, for example, how will that team know and care about what’s happening in Newcastle? How do we stop our sites being isolated? Our solution is Tribes, which is a bit like a school ‘house’ system. Everyone at NWTC goes into one of six houses – or tribes – named after vessels of discovery such as Orbiter, Kingfisher and Endeavour. So if you’re an Orbiter who works in the kitchen in Nottingham you might be in the same tribe as a bartender in Manchester. Our tribes compete against each other and win points for things like posting cool pictures and random acts of kindness – we never use the app for financial KPIs. We have monthly Tribes events involving people from all sites. For example, a minibus recently came to various pubs to pick up Tribes winners and take them to play in a football tournament. And two weeks ago we shut the whole business down, took everyone to Leeds, had a big party and announced the overall winning Tribes team.”

Impressive staff benefits ramp up the satisfaction levels, too. The company offers industry-leading maternity and paternity pay, but its education subsidies have probably the biggest wow factor. “Anyone can come along and say ‘I want to better myself’ and we’ll support them,” says Chris. “It doesn’t have to be industry-related education – it could be a course in photography or music… anything. We’ll say OK, how much? And in certain circumstances we’ll pay the full amount for the course they want to go on, or we will pay part of it and trickle the money in.”

As Chris says, staff happiness is the foundation of NWTC’s success but it’s not the whole picture. Now let’s briefly look at what’s built atop that rock.

Earlier we heard that one of NWTC’s business values is “exploration”. This relates to company structure as well as venue design and general ethos. Head office comprises 85 people and Chris is proud that all 85 – from the FD to the head of HR – is doing their job for the very first time. “Every single person is fresh in his or her role,” he says. “Most have been promoted from within, some have stepped into a new role from elsewhere, but all have been chosen because their personalities fit. We find round pegs to go in round holes and it’s wildly refreshing.”

One response to this might be: so what? Chris answers: “It means that no one has made mistakes in past roles, which of course means we make more errors than most. But it also means we don’t have any prejudice on decisions, which makes us the most innovative company I can think of. It also gives us ridiculous energy and a ‘why not?’ approach. We’ll always explore good ideas. If they’re stupidly expensive, we’ll have to think hard about them, but if they look reasonable, we’ll give them a go.”

Another storey built above the foundation of staff happiness is the business model itself, which has been honed to perfection. “Our places sit in a space that’s neither pub, nor restaurant, nor venue,” says Chris. “They’re wet-let and our biggest selling product is beer, but cocktails follow closely behind. We also host live music daily and serve over a million diners a year, so we’re a restaurant and music venue, too. We’re probably the only business in the country currently that’s one-third food, one-third drink, and one-third late bar. We could well be the only genuine all-day concept in the UK.”

At the apex of the NWTC pyramid sits the X-factor that the company has become famous for creating, with its let-your-imagination-run-riot fantasy of venues with tree and glass atriums, butterfly gardens and in-house music festivals. “It’s about giving customers social media collateral and bragging rights,” says Chris. “If a place is show-stopping and unique, then you become a destination and people want to share their experiences on social media.”

Beneath it all, however, are solid foundations, and Chris is clear in his belief that without staff happiness, the pyramid might look good but would be built on sand. “The secret is the teams,” he says. “People can replicate the light fittings, or what’s on the walls but the people behind the bars and in the kitchens will always be unique. Many businesses forget that their people are the most important bit – they are your ambassadors. You can’t have satisfied customers without happy teams. It’s impossible. If you’ve got happy teams, however, you can do anything you like; you really can.”

New World Trading Company has not become Britain’s fastest-growing pub company by chance. Neither has it achieved a top-ten placing in the Best 100 Companies to Work For list by stumbling across a way to keep its staff happy. Both have been skilfully achieved and are closely linked. By prioritising staff happiness and training, Chris has created the sturdiest of foundations on which to grow. Now compare NWTC’s approach with yours, or that of the business you work for. What can you learn and how ready are you to apply that newfound knowledge?